I don’t think I have ever been more sad or angry over events as this past couple of weeks. I’ve tried to stay rational and calm. I’ve written a couple of poems to let off some steam not to raise awareness — awareness isn’t really a problem but steam is. And it’s HOT and people aren’t being looked after by the people who are supposed to SERVE communities. It seems as if hatred stalks the streets and indifference has hands in some very deep pockets.
Only words
They do not serve who rule
both are in I’m not a Silent Poet.
One feels helpless.

In the meantime Bewildering Stories’ Editors once again chose to include my work in their Quarterly Review
Not for the Weak and Do Not Hurry, Do Not Rest
It’s a poem that reminds me of my oldest brother(right) Thomas Arthur Kyle who died, aged 82 this week in S. Africa. He had six children and a happy life and was well loved. A life like that is no occasion for over sadness.
My brother Stuart photographed here with him died over a decade ago, aged 62 of cancer. My mother died in 2003 aged 89. She had a LOT of children (see last month’s blog)

I was sitting in the garden the other night, after midnight, after a late supper, cooling off, thinking, feeling a bit sad, contemplating life, looking at the stars and eating a mint magnum. Must be summer, I thought. But our calendar says it’s mid winter. It’s an Australian calendar. Winter in South Africa too.

What to make of all that? I don’t know. Do you? It’s too warm to think, my head is spinning and the world keeps turning.
Happy solstice wherever you are.

Maybe it’s me
but I dread it you see
Summer, that is.
When it gets too hot
and I can’t go out,
walking that is.

Because I’m alabaster
and it’s a disaster
if I get the sun.
And I can’t get to sleep
in this infernal heat
well – can anyone?

And the minute it’s sunny
isn’t it funny
how mowers come out
buzzing and zizzing
or barbecues sizzling
well into the night.

But when loud talk and laughter
diminish to whispers
after midnight,
I eat an ice cream
in the garden and dream
up where stars gleam so white

and I think it’s okay,
the cool of the day
in Summer, that is.

I would like you to read this poem today. May and June were the names of two older sisters — twins born on the last day of May and  1st of June. They died before I existed. You can read about that on pg 6 in Gyroscope Review.

Also within the past month I have been flitting here and there spreading words like crazy:
It ain’t over and I’m the fat lady

The Children Shall Be Blameless
Not for the Weak 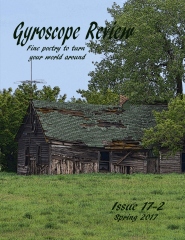