And as meteorological spring begins with St David’s Day, I will be baking Welshcakes as usual. One has to preserve these little traditions after all!

February is a strange little creature. It’s short and not always sweet but it has always been an important month for me — not just because it brings an increase in light from 5 – 6 pm or because of the first flowers that bring so much cheer or Chinese New Year, Valentine’s Day, Pancake Day but because of past significant events.

When I was a child it was the month of the Feis and when I was in Wales preparations for the Eisteddfod on St David’s Day. I always liked those events.

It was on the 3rd of February 39 years ago that I left N Ireland and my family behind to take up my first teaching post in Cardiff. Events do not come much bigger than that first time out in the world on your own, looking for a place to live, living in a new city, not a soul you know! Well I had already met Noel the previous year and so I looked him up. He’d written to me in the meantime so I thought it would be all right and one thing led to another. I wasn’t alone any more. There’s a poem I started way back then which eventually ended up in Three Pounds of Cells after many revisions. That is the way I tend to write.

This is who I was then…
South Wales Echo

Mary’s voice was audible above the city traffic noise.
She was a constant.
many layered,
a bag, a shopping arcade, a history.

I was all high hopes with half a bed-sit.

Her atonal notes,
expressed the urban opera;
a dissonance within the crowd.
Stout hand weathered with grime
permanently cupped for change,
she never begged.

One day I offered her a meal
in a café.
She looked at me aghast,
shuffled away.
I drew my smug conclusions
as her diva voice
faded between the shops:
one single, long, passionate outpouring.

When Mary died
‘The South Wales Echo’ carried the news.
A voice was silenced in the Land of Song.

I hear her still sometimes
shrill down the years.

It was in also February 25 years ago that Noel started work in Northumberland. To do that he had to leave me behind in Wales. It wasn’t an easy time but it was logical since his prospects were better than mine. One partner should never have to limit their prospects because of the other. It wasn’t a foregone conclusion, but a joint decision. I could teach anywhere.

I had a contract to work out and he had one to start so it was the only way and we had a house to sell and so I had to pack everything we owned. It was a time of leave-taking. It was also a leap year and on the leap day one of our close friends Ernie Caddy, died. I phoned Noel to tell him. It wasn’t until the middle of April that I upped sticks for the second time and came to join him.

But it sometimes does you good to have a break from each other — makes you appreciate what you’ve got. The school of nursing provided us with a very nice house rent free for 18 months in the grounds of the mental hospital (good place for me many would agree). Red squirrels in the back garden. I remember watching them scamper up these tall tress. Red squirrels are very endangered now. I haven’t seen one for a few years 😦 The house is gone too. It was bulldozed along with the rest of St Mary’s though the main reception building is now a pub.

So this spring marks our quarter century in Northumberland. It was like starting all over again at the time but we are happy we did it. 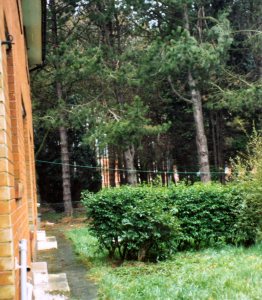 And this February? I seem to have been in bit of a flux as usual. Maybe I’ll sort myself out a bit in March…or April. But there’s this…

Home is where Noel is.

3 thoughts on “February • Those ruby slippers”