came to visit the other week and we did all the usual unusual things of which more later — pics and all 🙂
We were in Barter Books in Alnwick and looking at some of the more expensive/rarer books when I was reminded of a poem I wrote from an experience I had when I was still at school and had a summer job at the local library. It was published in The Shine Journal I believe but I can’t find it there which makes it more than relevant here. Because I was saying to my sister that I hoped whoever purchased some of the old and less expensive books on offer really looked after them — after all who knows just how rare The Lost Treasure by Gonfor Goode may be? You may be buying the very last copy without even knowing it.

I have been feeling the weight of this recently more and more (as a woman in her sixties who has no book to hold). I was looking at my work in various archives and I realised some it is simply GONE.

Static Movement GONE
Every Day Poets (where I was editor) GONE
MicroHorror (where I just celebrated 100 stories) Now CLOSED (but still extant so please do read them before they’re gone!)
(Did you know even KINDLE books are not permenant?)
And I am also in 100 issues of Bewildering Stories — the latest poem this week is another archaeological poem — In His Boots — about a man whose name is lost though his boots survive!

Horseshoe Crab in Zoomorphic Magazine fits well too! It’s all about species threatened with extinction.

“Caste Diva” is a story about endings too. It is in the Summer Issue of FINE LINEN which is a most unusual literary magazine and well worth a look and a subscription though single copies may be purchased too.

Several more poems are coming up and one soon at The Fat Damsel (long may she live!)

I am accumulating quite an archive at Postcard Poems and Prose now too. My latest Purgatory of Ideals seems to fit right in… it’s another collaboration with Walter Jack Savage’s brilliant artwork.

Endings — It’s a lesson I revisit time and again and I never seem to learn it. But one day… one day… Anyone I temporarily saved this poem from oblivion and here it is. Who knows — someone may like it and it may yet survive!

The book would not leave my hand.

Its faded front had not the
vivid colours of today.
Blue bleached by years,
gilt embossment
almost disappeared.
Braille for dead eyes.

I ran my thumb along its
spine to give it
one last thrill then
relinquished it to flame
as I’d been told to do
expunged it from the
catalogue
for all time.

How
I wish now
I could
remember

Hubris
Nemesis
the game we play.

Sweet is the moment.
Swallowed.
Gone.

Bright is the light
but night
will come.

There’s no
putting bubbles back
in champagne.

and I was genuinely overwhelmed by the number of Birthday Greetings on FB. Thanks so much to all of you for thinking of me.

Started well though with three poems published on the 1st. Quarry Garden is about my favourite garden in Belsay, Northumberland where a garden has been made in the quarry from which the stones for Belsay Hall was hewn. It’s my sister’s favourite too and she said the poem reflected it perfectly.

In Bewildering Stories I have a poem about another garden and Don Webb asks:

In Oonah V. Joslin’s “Meandering Through Monet’s Garden at Giverny”:

Esme is my sister and this hand made gift from her is what inspired the poem:

Coincidentally I took a very Monet-like photo in Belsay this spring. 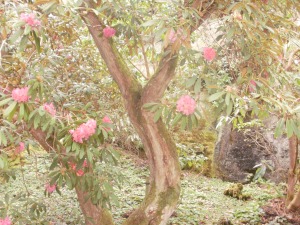 I asure you it is a photograph and not photoshopped either!

In Gyroscope Review two poems — one written ages ago at my writer’s group in Newcastle — The Archaeology of Time; it is about a moment when time stands still. The other entitled Pipestone, is about a very special place I visited with Kathleen Mickelson in 2012. It is a Quarry (again) right in the centre of the US near the Minnesota border with South Dakota and it is where all the indigenous people went to carve by hand the red clay from which (peace pipes) calumets are crafted.It was a place where all must come in peace!

I had a very spiritual experience in that place which resulted after a lot of writing and rewriting in this poem which is hewn rather than blasted and which I hope will take deep root in your hearts.

I was supposed to go to Holy Island again for my birthday. It is another place that brings peace to me (when the day visitors have gone and the tide is out and the sun about to set.) But it didn’t work out. I hurt my back painting trellises — again. This time not too badly but it wasn’t worth the risk traipsing round on one of the warmest weekends of the year — sleeping in a different bed etc… so I will have that little visit to look forward to later in the season and in the meantime I have my sister visiting so lots of catching up to do and I have had three more poems accepted so far this month so a good start to July.

I do hope you enjoy the poems