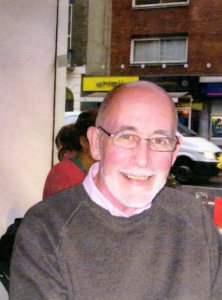 My friend John was a mentor and friend to so many writers in the Writewords Community. There he used the name Prospero. It is true to say that without his input and encouragement our output would have been greatly diminished. He was generous in  his comments and always nurturing and had a wicked sense of humour. He was a very spiritual man who practiced healing and he believed in reincarnation. I hope he has his wish.

Please leave a comment if you knew him and if you didn’t, read his work.

Links to some of his writing.

John in Doorknobs and BodyPaint

Beneath the Rule of Men Entirely Great

I take it Back

If you can add to this list, please send me a link and I will put it up.

We have uncovered, discovered, surmised
and can give a name to your condition;
reveal the brutality of your death,
the machinations of your politics
and whilst we can’t absolve you of all crimes
we do not live in more enlightened times.
The twenty first century has its own
corruptions, murder, cruelty and wars
and those who win still write our history.
Your bones have seen future light. Your cheated
image remodelled must be some redress.
It’s not for us to judge, absolve or praise
Richard. We lay you to rest who came to
this breathing world a second time as bone.

When they first discovered the King in the car park I wrote The Tragedy of Richard III and were the Pygmy Giant still publishing poems I would have sent this one to join it.  As it is I must place it here where it will get fewer readers I fear. It seems to me that the truth of what happened over 500 years ago can never be fully known but as we lay his bones to rest this week in Leicester Cathedral, we acknowledge the bravery of the last English king to die in battle, strength in the face of disability, humanity common to us all, fallibility and, yes — tragedy. I am no royalist and no ricardian but I for one am glad they found the body of Richard III and were able to give us so much information about the man and his death — enough to satisfy me anyway that his history was heavily revised to advantage the Tudor dynasty and later advance the career of one William Shakespeare. The debates will no doubt go on.

For me, Richard was a man; a man of his time and maybe we should let it rest there but he is being revered this week and with some pomp and ceremony and I am so aware that this is not the norm for skeletal remains. I often wonder what in the end will happen to all those other boxes of unknown bones dug up over the centuries. They are people too. I feel somewhat sad for them — picked over and analysed. I know that archaeologists and scientists do their best to show respect and interment is in any case no garantee of permanent burial — nor has it ever been and I think of my favourite line from The Mask of Zorro — ‘How would you like your remains displayed?’

I wouldn’t! So I at any rate am taking great care to make sure nobody will ever find hide not hair of me!

March comes in like a lion and goes out like a lamb — so they say. Well we saw a few wee tiny lambs on our way to Belsay yesterday but the lion is still a-roaring and we’re going to get slightly eclipsed and equinoxed at the same time this week which hopefully Dr. Brian Cox and Dara O Briain will be guiding us towards this week on BBC2. And in honour of that eclipse I give you Celestial Sunflower which was a response to a stunning NASA picture on BwS to which it is linked and a favourite of mine.

March is all good when it’s like this, cold (what passes for cold here that is!), breezy (that means blowing a gale to any other country), snowdrops, crocuses, aconites, primulas and daffs. I went looking for daffodil pics yesterday at Belsay but they weren’t out there yet! Instead I found a MONET — this pic is untouched. I pointed my wee camera and snapped! 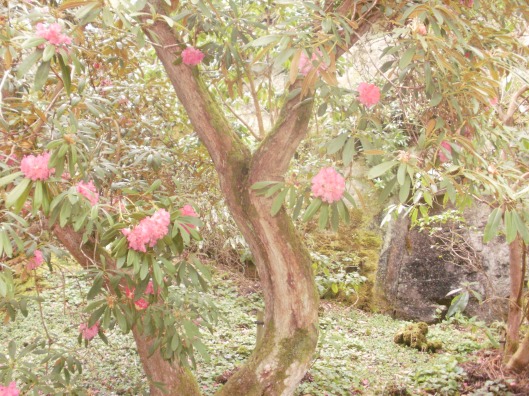 That’s Belsay for you!

I thought all this celestial activity called for some Extreme Weather

And a micro-story from me in PP&P too An Understanding.

And a short story (I don’t often write at this length) is published at BwS. Last Days of Coloc.

And ANOTHER monster for you The Pygmy Giant today. Yes — NESSIE is waiting for you 🙂

I am looking forward to being in great company in The Black Light Engine Room Magazine this month too with two poems; FROST and WAX AND WANING Buy a copy from the website. It costs £6 and Morbid — the editor need funds to keep this super publication going. This time you would be getting: Oz Hardwick Hannah Lowe Ann Cuthbert Bethany W Pope Myfanwy Fox Harry Gallagher Margaret Williams Helen Anderson Jane Burn Storybook Art Oonah Joslin Richard Skinner Interpreter’s House Julie Hogg Ailsa Holland Maria Isakova Bennett Pippa Little and Catherine Ayres amongst others and a superb front cover by Jane Burn too which is up for auction on Morbid’s FB page between now and the 28th March — a chance to own an artwork and support a magazine? Just follow the Morbid link above and bid!

Whatever you’re doing this week enjoy! In the great scheme of things we only have now.

A cosmic event for Trekkies this weekend was the death of Star Trek’s Leonard Nimoy. He invented the Vulcan persona — and the mark to which all other actors playing that role aspired. More than that he was, as a man, a fully paid up member of the human race and he will be remembered fondly.

I was intrigued to learn that the postcard background for Boketto for Beginners was a coffee grain painting by Dakota Stark! This interested me especially because the colour of the universe is, officially, Cosmic Latte! So what better for a poem that invites the reader to become part of that cosmos? I was delighted. Thank you Dakota! More to come this month at PP&P!

March is kind of cosmic in itself. The Vernal Equinox is on the 20th. I always like to use the term VERNAL ever since very unproffessionally, an ex-colleague interrupted my poetry lesson and said in front of a class that she “didn’t think they’d need to know that, Mrs Joslin”. Well, as it happens this VERNAL Equinox is on the 20th and between 8am and 9:30 there is to be a partial solar eclipse which will be seen to darken the skies here over northern Britain. As a lover of all things cosmic, I hope we have a fine morning that day so that we get the full effect.

And on 16th The Last Day’s of Coloc — a short story by me, and I do not write at that length often, comes online in Bewildering Stories. I hope you will read this one! It started as a flash fiction story in MicroHorror — The Final Chapter. That won an award and you also see the prize by following the link. But it set me off on the more detailed exploration of the world they inhabit. If you’d like to know the entire story of these creatures, all will be revealed in BwS this month. COSMIC 🙂

I have 99 Stories in MicroHorror alone and I intend to make that 100! Go and have a read. You’re bound to find SOMETHING to suit and if you do, do let me know. I like to know!

And The Linnet’s Wings Spring Issue should be out soon so look out for that! We have some great poetry and other stuff for you.