A few TREATS for Hallowe’en? My latest story, The Last Syllable of Recorded Time, is up at BwS an Interview with Master of Horrors (get some here) —> Nathan Rosen at Flash Fiction Chronicles, todays story and poem at EDF and EDP respectively, and also at EDP today’s Inspiration includes a link to a lot of poems by Edgar Allen Poe.   You might like my poetic insights on the work of Poe at EDP too – Gloria Mundi. I hope you like my Grim Reaper too. 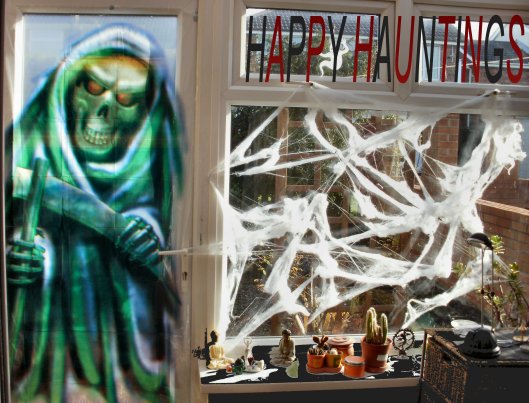 I’m in EveryDayFiction with: Hidden Communication.

Also look out here for a link to “The Last Syllable of Recorded Time” at BwS on Monday 🙂  and in case you missed it: Root Of Evil... is live at MicroHorror and only a few days of our competition left! And don’t forget to nip over to Every Day Poets for our spooky Hallowe’en poems.

A great time was had by all at the Poetry Library in Morpeth on Tuesday 25th. Kate Tym gave us a saucy rendering of her verse including from her new book Invisible Woman. Amanda Baker and Kate Tym have some lovely children’s books if you’re looking for Christmas gifts – click their link.
There was a Limerick Contest – subject Jamie Oliver – which Kate’s mother actually won but she donated the prize 🙂 and 4 readers including my friends Gene Groves and Michael Brett and Virginia Apted whom I hadn’t met before, strutted their stuff. I chose GHOSTS as my theme – it being Hallowe’en. Read this one of which I am rather fond.
21st Century Reali -T.V.

What’s with the candle in the night trick?
Is something wrong with the electric?

That token blonde’ll S H R I E K at anything
even the red light on the coffee pot.
I notice they didn’t cut the power to that!

Ghosts like it dark and quiet.
So they’ve brought
a TV crew,
sound man,
director,
make-up

(Okay so maybe I am a little pale…)

psychic investigators
the lot
and of course, the token shrieking blonde.

That infrared camera makes their eyes glow
Oooooooooooooh!
a damned sight spookier than any ghost
I know.

Everyone here is filming everyone else
using the very latest
in high tech
but no electric
light?

Tell you what… I’ve had enough of
this.
I really think they’re trying to take the
Mick.

So I’m off mate
to haunt some quiet attic.

This is no place for a self-respecting ghost.

It was lovely to meet friends old and new there and to hear their news though, as is always the case, not all the news was lovely. Thanks to everyone who came to that event.

If any of you want to contact me you can find me in FaceBook or leave a message here with your details and I’ll email back (and of course keep your email out of public view). If you want to see me read my work again I am on You Tube at Take Ten at the Cumberland Arms and hopefully will be again sometime.

We offer you seven days of HORROR at Every Day Poets in the run-up to Hallowe’en. Here are the names of the perpetrators – I mean poets… together with the titles of their work.

Join us all this week and right up to Hallowe’en for a taste of the scarey, the surreal, the inevitable, the murderous, the hidden, the literary and even the darkly amusing musings of our writers and of course the final two bites of inspiration that is
POETRY begins with POE month.

Give us S H R I E K of delight or fear. We like either this one week of the year and remember you are welcome every day at Every Day Poets.

Also don’t forget that over at Microhorror our Hallowe’en Competition is still running and you have until Hallowe’en to send us your WATER themed story – up to 666 words.

(including my good self)
and the

the earth made out of nothing in six days;

Praise the Lord and Guzzle the gas.

Money is the root of all. Capitalise

and pray, pray for all

the embryos autoclaved away. Sell on the debt,

Ask not the starving about the price of rice.

ever stands in the right and watches

A friend in Canada and I have just had an interesting discussion by e-mail. Allow me to paraphrase.

Did you know the U.S. government has decreed that the Internal Revenue Service require all non-U.S. financial institutions to report the financial holdings and transactions of any client born in the U.S.?

It’s no joke! There are cases of Canadians who were born in the U.S. and lived there for only one day, who now stand to lose all their property and life savings as penalties for failing to file U.S. tax returns for every year of their life.

The U.S. is apparently cracking down on international money-laundering for tax evasion (it seems domestic money-laundering is okay) thereby and abrogating the U.S. – Canada treaty. The danger lies in the IRS trying to apply rules retroactively — to a time when they didn’t exist.

The wider problem is the threat of expropriating foreign nationals. It’s not just Canadians that are affected, of course. Britain — and the rest of the world — may find that they’re being taxed to finance the U.S.’s mistakes.

Someone — I forget who — recently pointed out the irony: in the 18th century, England soaked its colonies by “taxation without representation” to pay for European wars, which led to the American Revolution. Now the U.S. is doing the same to the world to pay for its own mistakes.

The US has brought the financial markets of the world (admittedly with a lot of collusion) to their knees they are now trying to screw the last drop out of every ordinary Jack they can get at.

The history may be traced back to Reagan and Thatcher, when the financial “markets” — actually casinos — were deregulated and allowed to do whatever they please. Jane Jacobs’ “Dark Age Ahead” seems to be coming true on an accelerated modern time scale.

Things have come to a pretty pass when the headlines and sports pages are less violent than the business pages.

Business has always been down and dirty. Nowadays sport is just big business too.

Speculation here is that the EU itself may collapse when the people realize that it’s hopelessly in hock to financial gamblers who’ve gone broke making foolish bets.

Foolish bets? No that’s letting them off the hook. It’s worse than that. These people were self-serving capitalists. They were on the take – rigging the tables in their own favour and they didn’t care as long as the laundry stayed hidden and when it came to light they lied about it.

In Canada there is a lot of concern emerging over violence in hockey now that evidence has become overwhelming of brain damage caused by concussions. Meanwhile, the financiers have been engaging in violence of their own, doing exactly what you say!

It was all predictable – even by someone as financially naive as myself. I remember saying the day ENRON blew, ‘This is the tip of one hell of a berg!’

We had street riots here in quite few cities earlier this year. Nothing to do with present policies of course! Huh! The politicians labelled them LOOTERS – well they should know!

“Looters” in the streets of Britain? How soon everywhere else? What do they have to lose?

I don’t sgree with theft but most of them just swallowed ‘the dream’ – everything can be yours! But it’s not a dream – it’s a fantasy – therein the difference between hope and lies. And who looted the pension funds? And what happened to them? They got RICH!

I was brought up differently from that and I am very thankful that I do not expect fame and riches to tumble into my lap. Real jobs, attainable goals, reasonable expectations – that’s what we need to get back to.

You’re right though – the “anarcho-capitalists,” as they’re sometimes called, have won the day. They dream of a return to the Middle Ages, where they’ll be kings and everybody else will be serfs.

I think that one day International Socialism (I’m not talking about communism) will have to take over from capitalism as a model or we will not survive the anarchy that ensues. Most of humanity is being exploited to make the few wealthy beyond what they can possibly use and so they spend thousands on the latest fashion/gadget/accessory while others lose their livelihood and many actually starve in war torn states run by despots. It has to stop – doesn’t it? Such decadence has always come a cropper in the past.

Good luck with the article. Borrow anything you like; die Gedanken sind frei, as the dissident song went — “thoughts are free.”

Here’s something to do on National Poetry Day and you’ll be helping a good cause too.

Send them a poem and build a school.

It can’t be!
It is… ANNOUNCEMNT TIME – that time of year again when Micro Horror invites you to take part in the Hallowe’en Competition. This year once more I am helping Nathan to judge that contest and I’m aided by good friend, poet and Micro Horror reader, Jennifer Stakes. We’re looking forward to reading you stories. To find out more follow this LINK 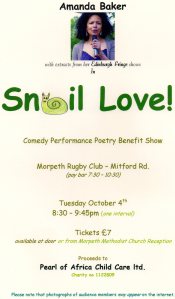 Link
Please come along if you live close enough.
Also on this month, I’ll be reading at the Library in Morpeth on the 25th, helping with a book launch (of which more anon.)

I’ll be in Every Day Ficiton this month with a story called “Hidden Communication,” and at Bewildering Stories, Hallowe’en week with a little Sci-Fi, “The Last Syllable of Recorded Time”.
At EDP we have great month of poetry for you too so please do subscribe (free) for your daily dose. Also I have an explication of Edgar Allen Poe’s poem “The City in the Sea” (for those of you who’d like to know just what gives me the brass neck to be editor of a poetry magazine, the least I can do is show I can write an essay).

I’ve come over all nostalgic at OONAHVERSE because this time last year we were having a wonderful time in Baltimore MD in the company of Nathan Rosen and his wife Jenesta. Go and have a look at the pretty pictures 🙂